DPH: Asked To Do More With Less 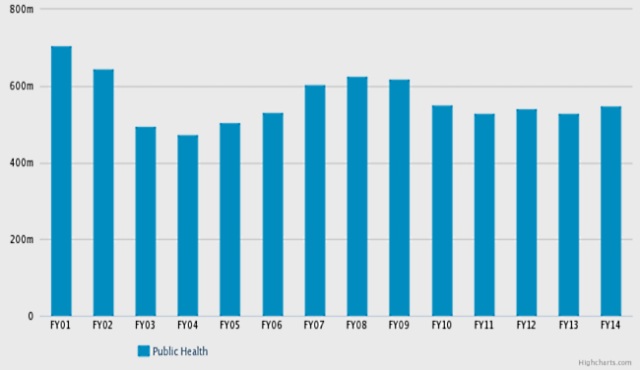 These are the weeks that the final decisions on the governor’s budget proposal for next year are being made by the administration.

We have a number of budget requests for health care, starting with full restoration of dental benefits for all adults on MassHealth.

But we also want to highlight the ongoing, cost-foolish, crisis of inadequate funding for the Department of Public Health (DPH).

DPH has been asked to do more and more with less and less funding in recent years. Last year spending was up a bit from the year before, but public health is still way behind. According to the Massbudget Budget Browser, adjusted for inflation, overall public health spending in FY 2014 is down $77 million, around 12%, from where it was in 2008.

DPH does not have adequate staffing and resources to fulfill all of its duties in a timely manner. For example, the Quality Division of DPH has been working hard on a new responsibility – implementation of the medical marijuana law. In the meantime, they are continuing their work on hearing complaints about care in nursing homes, hospitals, and clinics, and investigating those they deem most pressing. No doubt they could investigate more of the complaints if they had the funding to fully staff that team. They have been asked to start work on educating the public about end-of-life care and palliative care. The quality division also collects, analyzes and reports on Serious Reportable Events and healthcare-associated infections in hospitals. While these reports are supposed to be issued annually, providing relatively up-to-date information for both consumers and providers, they have fallen behind because of the need to keep up with the more immediate demands on their time. New reports on both SREs and infections may be coming out in the late winter/early spring, much later than had been anticipated.

Another example: the ambitious provision in chapter 224 for a comprehensive health planning effort has been dramatically scaled back. Instead of looking at a wide range of health services, to figure where there is either an oversupply or undersupply, the project is limited to looking only at one service, mental health.

Certainly every legislator and state budget official knows that public health is a core funtion of state government, and that investments in public health pay back profusely in lower medical costs for everyone, including the state.

As we move into the budget season, we strongly encourage the Governor and the legislature to ensure that DPH has enough funding to fulfill its mandates and serve the public by improving care for all residents of the Commonwealth.
-Deb Wachenheim

1 Response to DPH: Asked To Do More With Less